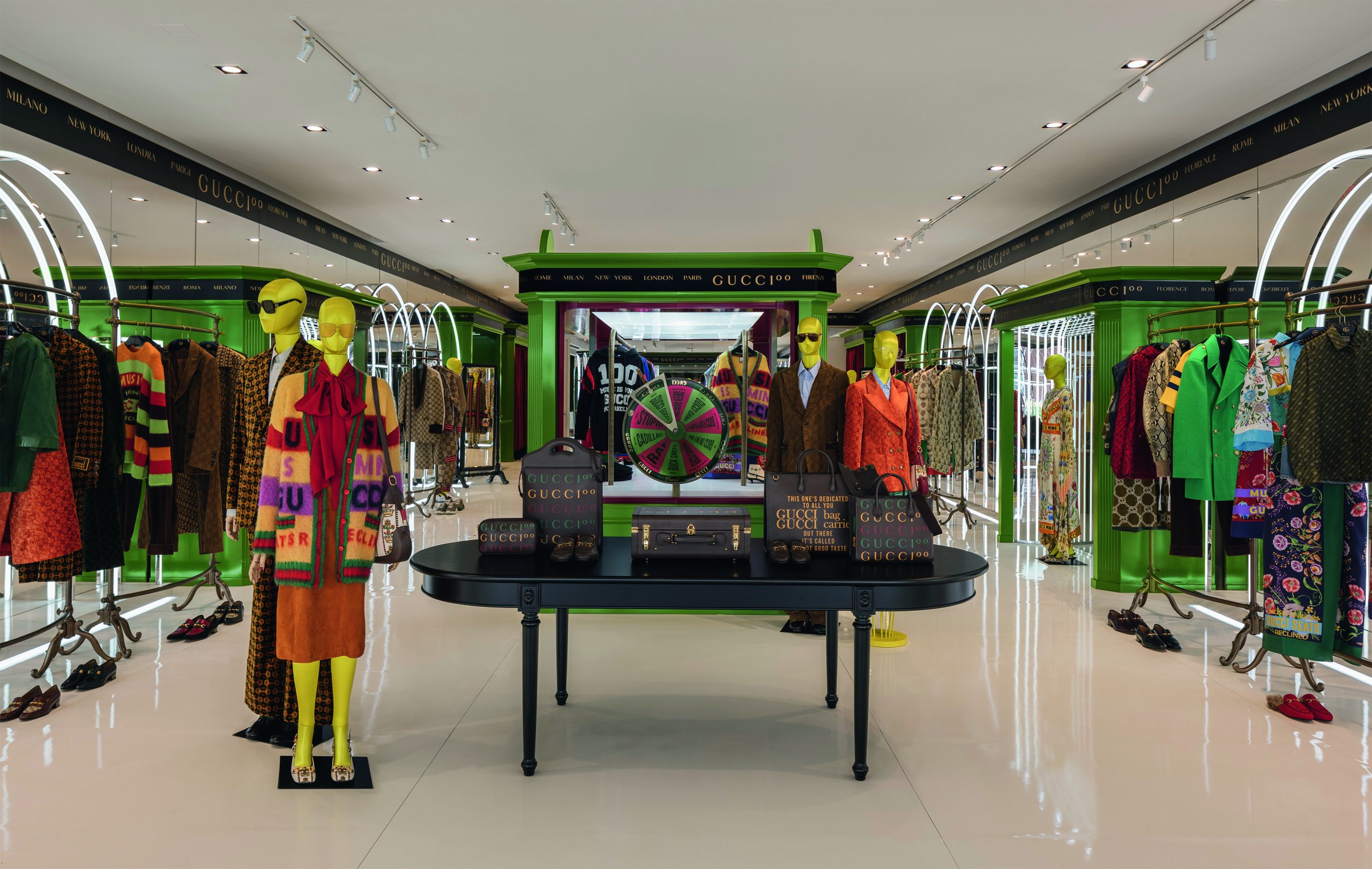 Gucci has launched a brand new series of Gucci Pop-Ups dedicated to Gucci 100: the collection that pays tribute to the centennial of the Maison.

A century-long heritage prompts reflection on the staying power of the brand and, through a contemporary lens, how profusely it contributed to the vocabulary of pop culture. A key theme within the Gucci 100 collection takes its cue from a number of songs that mention the brand. A selection of lyrics from these songs adorns ready-to-wear and accessories, at times together with the Gucci 100 logo, designed for the occasion, in a side-by-side tribute to past and present.

Showcasing the products in an immersive, dedicated environment which reflects Creative Director Alessandro Michele’s unconventional approach to luxury fashion, the initiative is aimed at connecting and engaging with clients over the world and their surrounding communities and debuts now in a number of locations including New York’s Meatpacking District, a new neighborhood for the House, Miami Design District’s Paradise Plaza, South Coast Plaza’s Jewel Court, as well as additional In Store Pop-Up locations in existing stores in Houston, Beverly Hills, Chicago, Atlanta, San Francisco, and Toronto.

Gucci’s Meatpacking District location includes a full takeover of a historic neighborhood building featuring the Pop-Up on the ground floor and an additional two floors, available by appointment only, boasting a total of 18,000 square feet. Additionally, Gucci’s Pop-Up at Miami Design District’s Paradise Plaza space features 5500 square feet of indoor and outdoor space that has been completely transformed.

To celebrate the House’s centennial, Gucci has also partnered with Saks Fifth Avenue, the exclusive wholesale partner in the United States, and Holt Renfrew Vancouver, the exclusive partner in Canada. Gucci 100 will take over Saks Fifth Avenue’s Center Six Windows from September 30 through October 13. In Holt Renfrew Vancouver, the collection will be featured with a dedicated window display and in-store visual installations.

The Gucci 100 Pop-Ups showcase the collection in a multi-dimensional environment defined by the juxtaposition of classic architectural details and visionary features like perimetral arches, LED and white reflective floors. Mirroring the collection itself, the Pop-Ups celebrate the connection between past and present, made tangible through music. By spinning a wheel placed on the side of a cabinet, visitors are invited to discover the playlist of the handpicked songs from different decades – all namechecking Gucci.

Speaking to Gucci’s experimental approach that places the Maison at the forefront of the dialogue between fashion and virtual reality, the Pop-Up concept will also be available online. By visiting the Gucci 100 Digital Pop-Up through the dedicated platform on gucci.com or on the Gucci App, users will have the possibility to explore a digital version of the space, entirely redesigned in 3D, and to engage with the offering and the music.