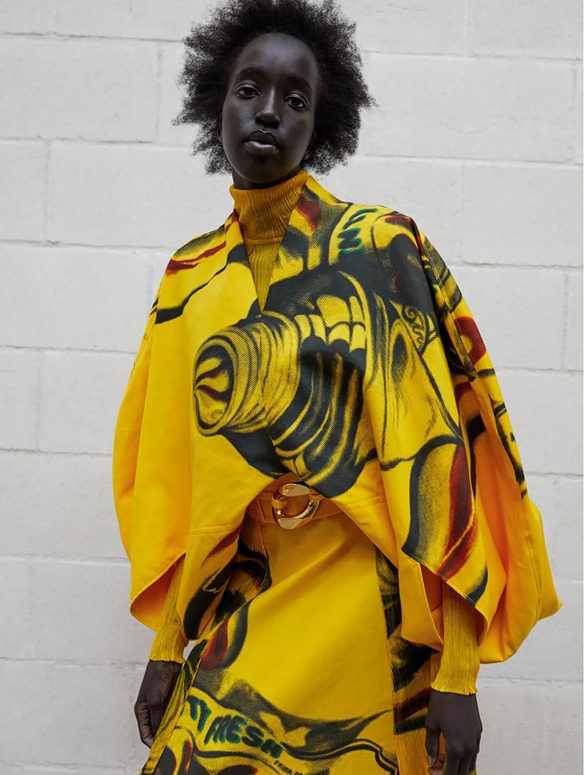 Jonathan Anderson has always been obsessed with the shapes of clothes. How these shapes come about has been at the center of his fashion since he launched in 2008. For this fall collection, the designer dived deep into a most personal way in how he experiences the body and curves, and thus the resulting clothes.

In a long personal letter that accompanied a video about the fall collection JW Anderson, Anderson wrote about his experience meeting the ceramicist Dame Magdalene Odundo when he curated an art show in 2017 titled Disobedient Bodies at the invitation of The Hepworth Wakefield. This show is an exploration of the body by artists and designers from multiple art forms. In June 2020, he encountered the young American artist living in the UK, Shawanda Corbett, who made totemic sculptures as embellished vessels representing different characters.

I feel lucky to have encountered these two artists, born continents and generations apart, both exploring the idea of the body and its physicality, and the notion of pots not just as physical vessels, but also vessels of information.

One of Odunda’s works in black and white, titled Cat Walk caught Anderson’s attention in addition to Shawanda’s paintings Chair with plastic cover, part of the artist’s probe of the body. Born with one arm and no legs, Shawanda Corbett, in her work, confronts the hardened definitions of fixity and boundaries with her refusal to accept defined structures with the intent to incite new meanings.

“I became fixated on this idea of the two-dimensional becoming three; of the paintings being translated into blankets which then become tapestries that take on the form of a body—the idea of the volume, the body, and the curves. The women’s autumn-winter 2021 collection was born out of the idea of experimental volumes, of slowing down the process of looking and homing in on the idea of rounded and fluid shapes,” Anderson explained how his fixation on volume, a defining characteristic of his fashion work.

Anderson translates this new idea of two and three-dimensional into clothes like green knit sleeveless dresses that bubble out at the legs or like a khaki trench with multiple layers enveloping on top of each other, transforming the traditional trench coat into a three-dimensional sculpture. An orange strapless bubble asymmetrically cut top with a light blue folded skirt or the black leather strapless dress can explode into a balloon shape dress.

“I was thinking of the idea of totemic shapes, things that are elongated or with abnormal volume or a giant pom as a bag or the knitted jumpsuit that becomes more fluid. Or, if you look at the jackets, you have these unfolding aspects to the cotton drill – the idea that the layers have been peeled off. I wanted to go back to the idea of experimental and boiling things down. Honing into a more specific and direct,” Anderson explained part of the process of making these fall shapes.

At times, these dresses imitate the shapes of clothes on Corbett’s body, like the cut-off jeans and red tee-shirt she wore to be photographed by Juergen Teller, who also shot Odunda, Corbett, and the model Nyaeuth Ziam. As with any new proportions, the eyes have to get used to them first to reach beyond their ‘strangeness.’

Teller’s photographs are made into a series of nineteen large-sized posters to be posted around London like in June with the menswear presentation.

Besides, both Odunda and Corbett contributed their artwork to make a limited series of blankets, ten per artwork and 40 in total, and Odunda prints from artwork she had made in Belfast – where Anderson grew up – on a white v-neck dress with a black motif. The blankets are handwoven in Scotland.

“It was incredible to see and to feel the power and influence of objects can have on you,” Anderson said.

If there is ever an authentic collaboration with art and fashion, not just for the exploitation of art by luxury fashion houses to make their brands a bit hipper, this JW Anderson work with Odunda and Corbett has that integrity and authenticity. The project feels real and not any exploitative opportunities.

This is the most personal project I have ever done, and probably taking the longest, and it takes me into a new window of where fashion could become.

– Jonathan Anderson on the future

“It is nice to go back to the idea of the silhouette, the idea of the body, the idea of making. Fashion should be about collaboration; it should not be a linear process,” Anderson said on what the fashion process can be coming out of the crisis now.

A great designer has always been the one with specific and peculiar obsessions that give rise to making wonderful clothes and changing how we look at clothes themselves.