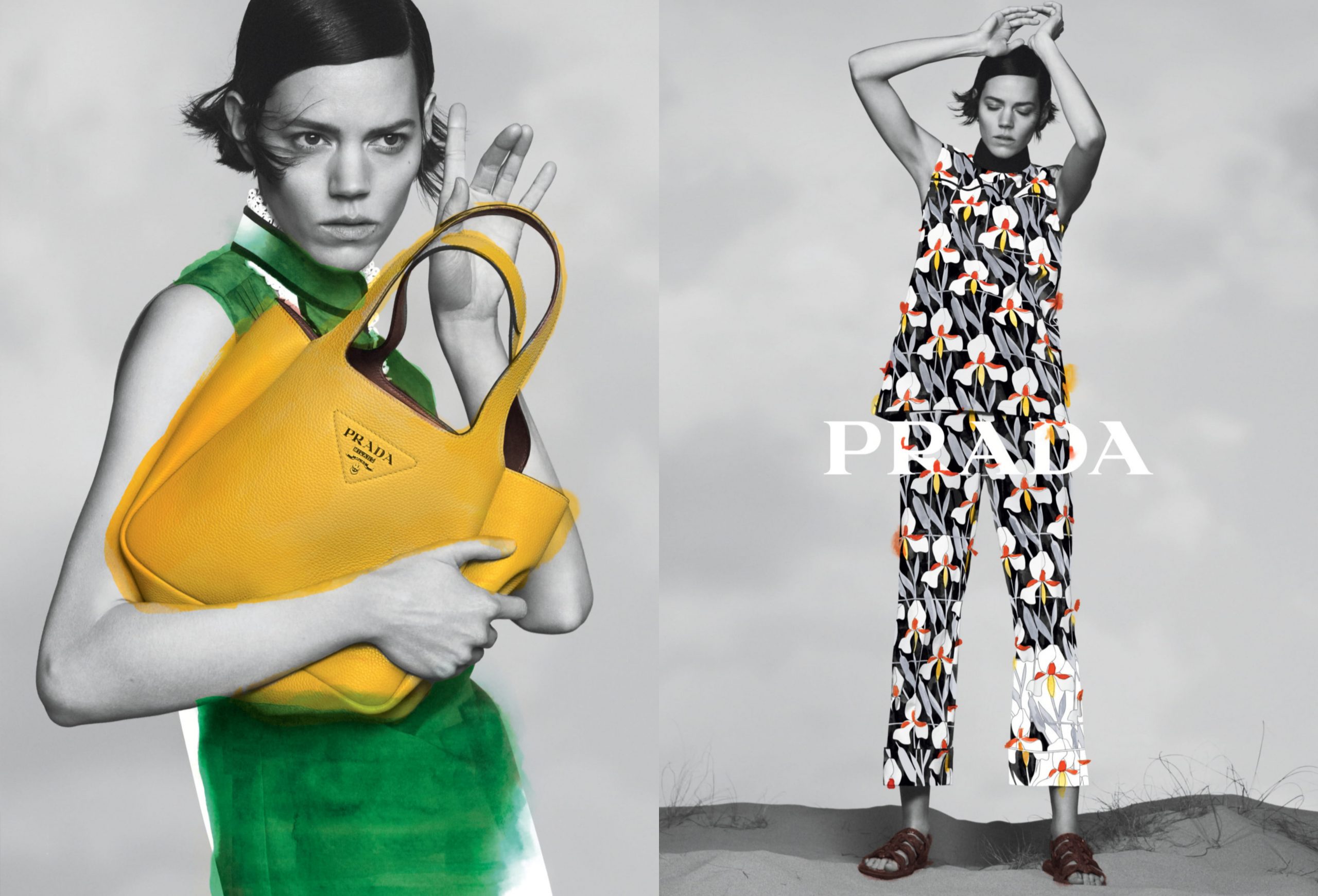 There are moments when we muddle through life, or sort of float along as if in a waking dream…and then something happens that touches us, inspires us, and sparks a new awakening. Often it is something that feels new, and yet connects to our realm of existing experiences, shifting our perception and shining a light on aspects of life we were not completely aware of. The new campaign by Prada has this effect, combining photography, digital collage, painting, and animation in a transformative way; it awakens the mind and senses and seems to reflect our new reality, which is defined by flat screens in the form of computers, smartphones, tablets, and digital televisions. These objects are purveyors of technology and portals into a thriving collective consciousness, with a potentially endless opportunity for social connectivity, and millions of interconnected minds who are more dependent on these digital portals than ever before. The campaign film seems to dip a brush into this intensified version of our digital reality and paint a picture of the virtual world blurring into the physical world, until they merge into a bright and colourful new existence.

The campaign was photographed in London on February 13, 2020 by David Sims, and hand-painted with vibrant watercolours in New York in the following weeks. A corresponding short film brings the painterly quality of Sims’ still images to life, by fusing strokes made by the human hand with digitally combined rotoscoping and effects animation, creating the illusion that Freja Beha Erichsen is dyeing her own clothes with surrealistic paint-by-numbers-style washes of color. Another short film combines video footage with different line qualities, in an exploration of black and white shapes and form.

Erichsen has been a mainstay of runways and ad campaigns since her debut in the mid-2000s, and though her physical appearance has always been a vision, one could argue that she is just now reaching the apex of her beauty. Smooth and angular, she looks like she has been sculpted out of grey marble, and so melds into this abstracted world as if she was designed for it. In the colourful short film, she lives up to her nickname “Queen of Cool” through her restrained yet expressive performance; her face appears stoic but her body moves as if she can feel the waves of colour moving down the length of her slender frame.

Since this is Prada’s Pre-fall 2020 campaign, it is likely that these concepts will be explored further. The brand has hinted that “these films will also give life to a multi-layered narrative” via digital platforms and Instagram, and the short films end with notes that say “Coming Soon”. We are hopeful for (and look forward to) more films and imagery that will expand this stimulating narrative. In the meantime, we are grateful for these exquisitely abstract messages of creativity and positivity, which bring moments of joy through colour and technology.