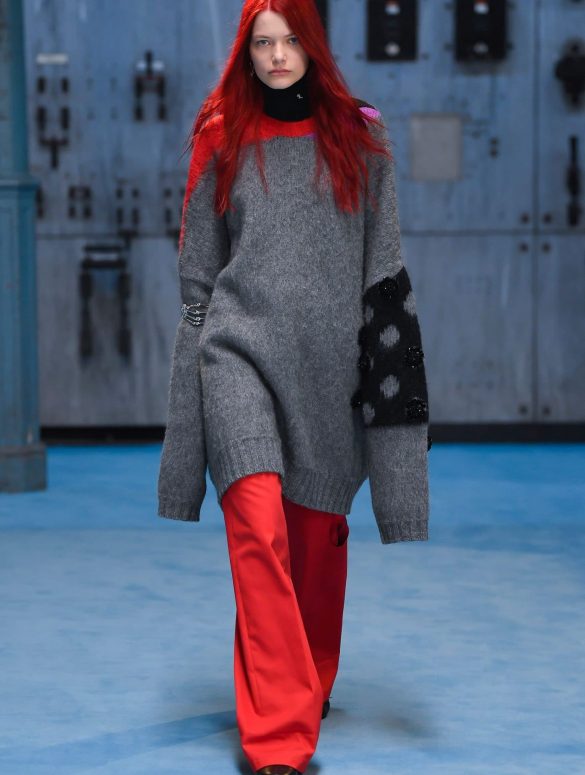 What Fashion Means Then and Now, in Words and in Clothes

Words have always played a central role in how Raf Simons conveyed his fashion’s thinking and aesthetics. Over these two and a half decades, words are often written clearly on the clothes themselves, spelling out the moment or the season’s anguish, anger, and desire right there written on the clothes. A black sleeveless tee-shirt had the phrase Never Mind printed in white for Spring-Summer 1998 Black Palms collection. The term ‘2 pairs of Black Jeans’ was handwritten cursively on a white cropped tank for the Spring-Summer 1997 Teenage Summer Camp catalog in the format of a 33rpm LP vinyl record.

In the few days before the premiere of his fall 2021 co-ed film, Raf Simons posted a series of words on his brand’s Instagram. The words are in capital letters in different colors: Ataraxia in violet, Equanimity in light yellow, allegiance in green, Dichotomy in orange, Devotion in blue, and Synchronicity in red.

Separately and taken together, these words confer in these fall clothes all the juxtapositions and clashes of shapes, colors, and texture fabrics that result in a harmonious and stellar collection appropriately titled Ataraxia.

Unspoken within this taped show is the passage of time. Simons reflects on his own influential body of work, especially in menswear. Besides, he is reconsidering the clothes he has made throughout this lengthy process since he started in 1995.

Rarely used in fashion, the word Ataraxia comes from the Hellenist philosopher Pyrrho and subsequently by Epicurious to describe a state of freedom from distress and anxiety, a form of calm mind preferred for soldiers entering battles during classical Greek antiquity. Simons deploys this same word not for describing soldiers’ state of mind on the fields but to allow this essential introspection within his fashion work in the past two and a half decades to find the harmony within all the contrasting elements crucial foundations to his aesthetics.

Now, words have wholly disappeared from this fall collection show taped at the former coal mine discovered on location in 1901 that transformed the tiny village of Genk, a bit east of the Dutch city of Maastricht. Just briefs remnants the alphabets endure like the R, the RSSR, and the R Simons logos on the mock cotton turtlenecks or navy sweatshirts, on the back or the sleeves of these quilted parkas that recalled similar shapes from the Spring 2019 collection show.

This fall show is a stellar realignment of the rigid hierarchy of fashion construction that Simons has spent decades unraveling.

The super and exaggerated oversize forms seen here first emerged for Fall-Winter 2016-2017, but then the giant hand-knit sweaters felt rough with frayed edges intentionally left unfinished. Now, the blue dropped shoulder Shetland knee-length sweater is undoubtedly more elegant, with a steel ‘bone hand jewelry accessory grabbing the wrist on one side and red embroidery on the other. The XXXL scaling in today’s garments feels assuredly new in Simons’ pantheon of fashion.

In this second official woman collection, the clothes are the complete mirrors of the menswear with more of the unisex garments worn by both genders. The long black polka dots tunic and black pants is a bit of an oddity in the show as it is a unique lean profile look in the collection and without a male counterpart.

Simons aims to raise the spirit of balance and equilibrium in the sensitive and inventive manipulation of shapes, allowing some of the predominant billowing outlines of haute couture garments, at times ultra-feminine, inherent in the late 1950s to penetrate crafting his more grounded streetwear ethos.

The memories of these haute couture shapes are now alive on the series of brown and black nylon quilted puffer coats with the puffs sleeves, the oversize and curve back contours, and the exaggerated long sleeves and oversized spread collars that opened the show. The mundane parka – a basic sporty garment – has now been elevated via borrowed and shared constructions to become a completely different kind of coat. It is the idea of balancing contrasting elements to achieve a state of Ataraxia, with the softness of an ice blue mohair sweater brushing against the white crisp of a shirt jacket.

One of the designer’s significant contributions to menswear’s evolution is his destruction of the rigid structure often associated with the limited confines of men’s clothes. In Simons’ hands, the men’s garments are softer and the forms more fluid. Simons feminized menswear, in the same way, Haute Couturiers like Cristobal Balenciaga and Hubert de Givenchy resisted Dior’s 1947 New Look’s ultra-rigid construction in creating the modern hourglass shape in fashion. Balenciaga and Givenchy offered clothes that disrupted the nipped waist and the full-skirt look, loosening the formality with leaner and slimmer lines erasing the square shoulders and more masculine forms.

But Simons’ feminization of menswear isn’t just restricted to tailoring, but this design emphasis governs the entire range of his men’s wardrobe. In this fall show, the fluidity of the yellow wool creased front pants, or similar versions in black wool, erase the formal outline of men’s pants, thus allowing for a complete soft look overall even when these pants are under a black wool slim single breast coat. The designer banishes the archetypes of masculine constructions in favor of a fluid profile.

In Simons ‘clothes, the male body is submerged and hidden and is not a subject to both sexes’ fetish gaze.

Instead, the female models wore the more tailored clothes like a dropped shoulder buttons single breast loose jacket with a bright yellow sweatshirt and black cigarette pants or a charcoal wool stripe single breast suit with a red Shetland wool sweater and relaxed pants. The new men’s suiting is now the blue or green long shirt/loose pantsuit rather than anything tailored saved, perhaps for that black wool slim coat.

The kind of fashion Simons proposed now in the post-pandemic mode times aren’t so different from his proposals earlier in his career for the post-minimalist era. Emphasizing cutting precision, even if the oversizing seems arbitrary rather than controlled, these fall clothes do not fall into either the comfort or the opulence arena.

Renewing one’s signature fashion silhouettes and making them completely new again is perhaps one of the most challenging tasks for designers working on their brands or as artistic directors elsewhere. More than that here, Simons baptizes these contrasting and divergent elements anew into clothes that exude the familiar and clothes devoid of any commentary on this present time, save perhaps for the need for a reflective and meditative moment. And the clothes are without any actual words written on their surfaces.

After having seen all of Simons’ shows since his first formal show in Paris for Fall-Winter 1997-1998, looking at this show on-screen today reminded me of much Simons have built the kind of allegiance for his fashion, first with clothes that don’t look at all strange to the kids. As these young people became familiar with his work, Simons gives them the clothes that have characteristically defined them over the years, the same clothes that define him as a designer.