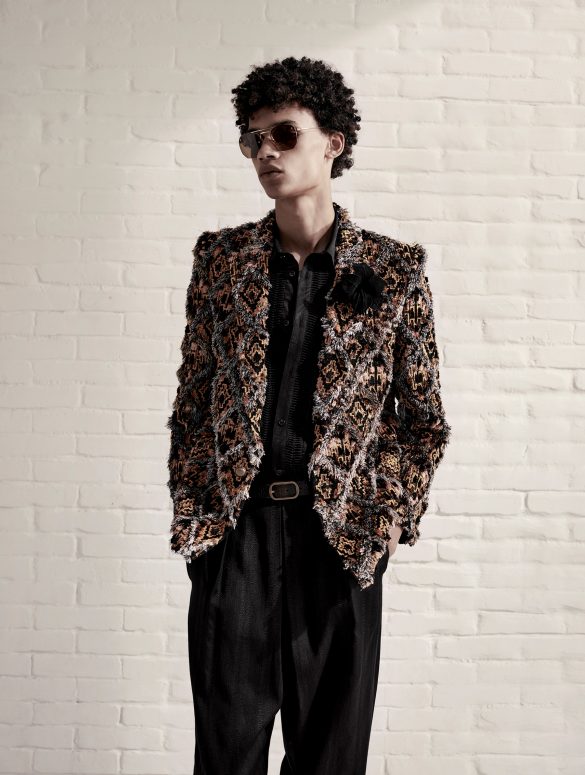 No Matter How Long the Night Is

In the brief time that the fashion brands have had to adjust to a new reality brought on by the continuing pandemic that saw the shift of fashion shows to online digital initiatives, the major brands have quickly adopted the methodology of Hollywood marketing of films in the last few months since the launch of the Paris Digital Fashion Week starting with the fall Haute Couture then the men’s spring ‘shows’.

Prior to any live fashion shows, information about the show and the collection are kept as state secrets without any communications to the public at large, save perhaps for a very limited amount of one-on-one previews for the journalists from the dailies who have to file the post-show review on strict deadlines – and in the internet era, that means the sooner after the show ended the better.

Now in a different environment, major fashion brands have adopted Hollywood marketing mechanisms to promote in advance of the release date with the exact time frame when the new season’s collection film would be revealed among the various digital channels and networks. The week or so before the premiere of the short film launching the men’s spring 2021 collection titled ‘No Matter How Long the Night Is’, Saint Laurent has already mounted giant billboards and street posters in Los Angeles and New York featuring black and white image depicting a skinny male model with his hands raised above his head in addition to a series of flag poles planted with light pastel color flags flying against the blowing wind.  (Many netizens commented at YSL Instagram account that the flags represent the pastel colors for the trans community flag in the same way as the rainbow flag is for the gay world.)

Then there is the short snippet presumably an outtake from the upcoming film features a model running and climbing up the Basilique du Sacré Coeur in the hills of Montmartre in the northern 18th arrondissement until he settled comfortably sitting in the central bell towers against the darkening sunset sky accompanied by a soundtrack of hard-hitting piano tones. These are just the teasers to incite excitement ahead of the main event.

“Breathing, reaching the horizon, looking at the future, no matter how long the night is,” said the press notes about the theme of the six minutes long film with a crew of models – each wearing different combinations of looks from the upcoming spring collection from relaxed cotton suits to silk blousons -running and jumping on top of rooftops and monuments in Paris, New York, and Beijing in a series of rapid action movements that reminisced the scenes of rooftop chases from the various James Bond movie like the opening scene of Spectre with Daniel Craig leaping over houses at the Plaza de la Constitución or pursuing of a mole in Quantum of Solace over the homes in Siena.

‘No Matter How Long the Night Is’ reflects much more than just the optimism that fashion will emerge with strength and agility and will break through the glass windows in the same way the models smashed through the ceiling of the Grand Palais. This high energy Saint Laurent film provides not only the octane of optimism and certainty that fashion can overcome the current global depression due to the ongoing pandemic but more critically the film shows a new perspective and a new foothold for the brand’s men collection that has often in the past buried behind the womenswear.

The real difference here is the new approach that pretty much leaves behind the baggage from the previous seasons, mainly the sole reliance on the YSL heritage to provide the springing board to dive into making men’s clothes. Updating the house heritage one way or another seemed to be what is expected of creative directors and designers working for these major brands. For example, the spring 2020 show in Malibu was inspired by the bohemian mood of the 1970’s Marrakech but now reimagined for a different era or the spring 2019 collection steep in the idea of the late 1970’s New York and the famous Studio 54 where YSL launched the famous Opium fragrance in 1978 shown against the downtown skyline of New York City from the shore of New Jersey across the Hudson River in Liberty Park.

Now with this men’s collection, Anthony Vaccarello has wiped clean all these previous references to the storied heritage of the YSL house and in a way start anew by simply looking ahead and forward and asking what kind of clothes men would want to wear in this current times. Vaccarello relies on his instincts rather than the house’s archives and histories.

The clean and straight silhouettes’ clothes feel light and airy with much less of the imposed restrictions of a specific theme or an adherence to a strict vision or heritage.  Among the strongest looks are cropped black wool crepe blazer with sequined trims lapels over a cotton stripe tee shirt and cigarette pants, white jacquard one-button suit with black and white polka dots shirt, tapestry floral blouson and black slim pants, a brown leather bomber jacket decorated with black skinny leaf patterns, or a black wool slightly flare coat paired with tight wool pants and black leather boots. The white sleeveless cotton shirt with a pair of black pants can be a perfect evening ensemble, surely great for a dressed up outdoor dinner party.

The white or black single-breasted suits do not convey any sense of formality, the short sleeve floral print black western shirt worn with black pants with black leather belts does not convey the casual, and the black velvet jacket with gold pattern shirt and cut off black washed denim shorts does not feel like ‘streetwear’. There isn’t any emphasis on gender fluidity although there is no reason why these garments can’t be for either sex. But the customers can decide where and how to wear these clothes when they arrive next spring.

These are great wardrobe choices in a collection that will have a wider audience appeal than just to a set of niche consumers.

As with digital shows, the details of the clothes and how they are made are often overlooked. At Saint Laurent, haute couture workmanships apply to many of the ready to wear garments. Here what seemed to be a print black velvet blouson is actually made from different colors of cut feathers embroidered on silk. Similarly, an evening jacket that looks like crushed velour is also made from fine feathers assembled into floral-like arrays.

The film ends with a hope for the return to the live fashion show formats as models take a turn walking like a finale on a raised platform across from the Eiffel tower where Saint Laurent stage all of the recent women shows. Of course, in this film as in real life, the lights sparkle on the Tour Eiffel as they would have at every of the 8 PM show time on the first Monday of Paris fashion week.  Hopefully, Saint Laurent will stage its shows off the Paris official calendar during the course of the year in this same spot or elsewhere.

Perhaps in the near future, the men’s collection will have its own separate space and show instead of conjoining as a coed show as Saint Laurent had previously staged standalone men’s shows in New York and Malibu, California for the spring 2019 and spring 2020 respectively.