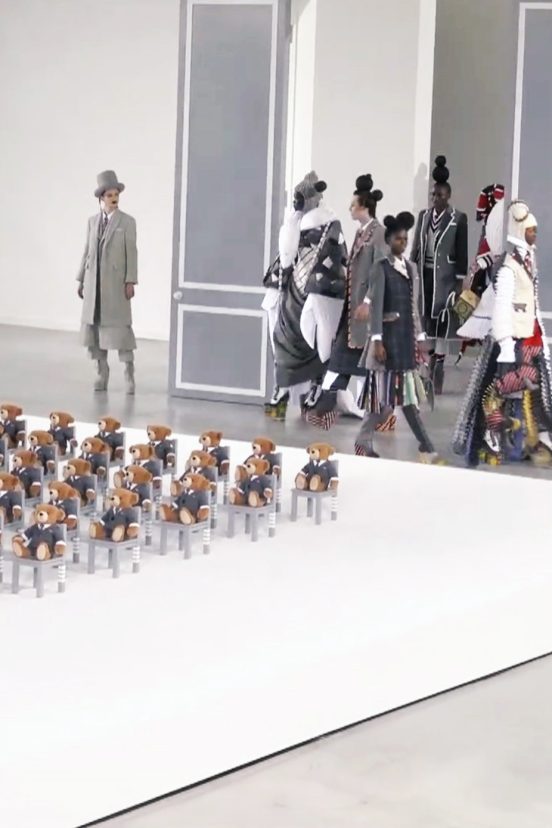 Challenged, as so many of us are, by the uncertainty of the present moment the timing of his mission couldn’t be better. We wrestle with what’s normal and what isn’t? Should we wear a mask or not wear a mask? Some at the show did; many did not. Work remotely or not work remotely? Attend a show or don’t attend a show? Move to the Berkshires or don’t move to the Berkshires?

Browne’s creation was a balm to the psyche and a reminder that beneath the thin blanket of stress covering us is plenty of joy. Thinking of toys and childhood reminds us: Underneath there somewhere is an innocent little girl or boy, Browne told The Impression backstage after the show Friday.

It was really to keep that moment, that childlike moment. I wanted it to be fun and to remember to be true to yourself, for everyone.

Two female stars and one LBGTQ influencer showed the range and depth of the Thom Browne brand. Maisie Williams in a bustier, Danai Gurira (Black Panther) in a long sleek sleeveless jacket, and Zara in a gold gown and quilted puffer stole by Norma Kamali, were on hand to see the show.

Braving the backstage crush, sizzling-hot Jon Batiste, who earlier this month snatched up five Grammy awards with 11 nominations including Album of the Year, wore a black and white suit and tie by Thom Browne. Anna Wintour walked briskly in with Met curator and Browne’s partner Andrew Bolton, no doubt with Monday’s Met Gala on their minds.

Batiste was having fun riffing and practicing high notes as he waited to congratulate the designer. His memorable performance of his song “Freedom” at the Grammys bubbled over with infectious fun.

It may be a coincidence that this is his first Thom Browne show, but the moment seemed incredibly appropriate.

Browne has always had a sophisticated and innovative approach when considering how to present his ideas. It’s interesting that the man who brought us shrunken suits – that was nothing if not a boyhood evocation – would suggest so strongly a return to the toys and their accompanying joys of childhood.

Held at the Jacob Javitz Convention Center with daylight streaming through the glass panes and washing the space in sunbeams as the sunset, more than 100 little brown teddy bears in their TB jackets sat on miniature chairs. The chairs were gray, Browne’s signature color, and, surprise, so were many of the whimsical and beautifully tailored jackets shown throughout.

But let’s jump to the near end of the show.

This is where Browne’s overall concept coalesced.

The toy-inspired, kid-versions were fantastical artistic pieces. Browne said the child’s film “Rudolph The Red-Nosed Reindeer and the Island of Misfit Toys” was an inspiration.

Beautiful tweed jackets trimmed in grosgrain, some with brass buttons stood for whimsy and pragmatism in different outfits.

With Browne’s characteristic gender sleight-of-hand,  if you were momentarily at a loss as to who was male and who was female, one clue was the male models were the ones wobbling in the high heels and supersized platforms, the females were the ones gliding along on steady legs. Now you know what women really do, guys.

Parent company Zegna’s recent public offering should give Thom Browne plenty of coins with which to spread his arch, artsy, and sartorially excellent brand of style far and wide.