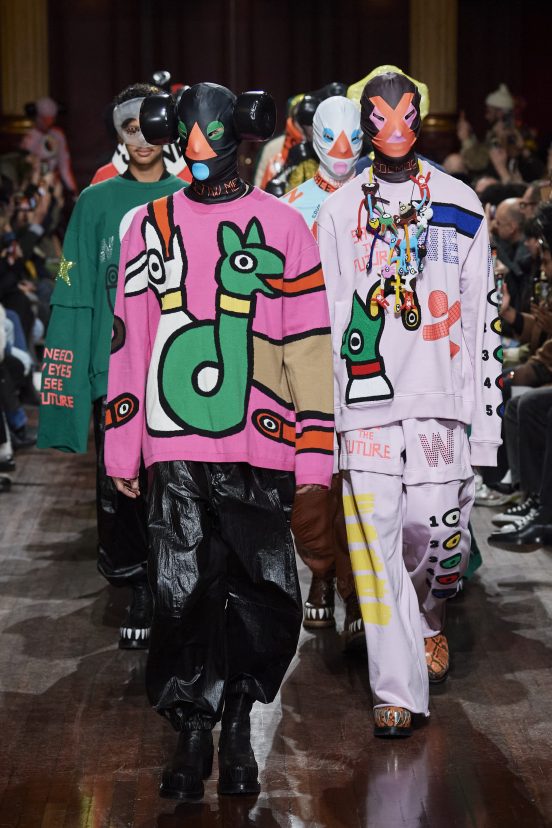 Fall 2023 saw Walter Van Beirendonck play with inflatables and animal allegory to give his cultish and colorful world of urgent optimism a protective layer of cocooning, ballooning buoyancy.

Always dancing to the beat of his own drum, the Antwerp Six’s most audacious and idiosyncratic member (and that’s saying something) delivers one of his most urgent but hope-inspiring collections yet.

With their monochrome color schemes and classic tailoring references, the collection’s first few looks felt relatively subdued (subdued by Walter’s standards, of course, still means beautifully bonkers), save for the inflatable, pool-donut-like structures that studded their torsos, arms, and heads. The world is challenging and violent; it’s no wonder a sensitive artist’s soul like Walter has would want to opt for some protection from its many bumps.

The motif appears throughout the collection, both in this external form and built into the structure of garments, augmenting the silhouette and creating a unique sense of space among and between clothing and the body. A long transparent vest full of inflatable compartments is worn under an alligator-skin coat; the ribcage of the designer’s signature skeleton jacket gets a blow-up treatment; a transparent jacket that mimics bubble wrap is worn as an outer layer as if to say, “I’m fragile.” Fragile but also so cool.

Along with the inflatables, garment structuring also plays with the idea of expansion, augmentation, protection. Sleeves and pants have flappy front panels that round out the silhouette and recall a lizard’s warning frill (a reference that’s picked up by the snake and alligator skin and the tooth boots, another riff on a WVB classic). Weird as it all is, everything is beautifully made; Walter is still head of the Fashion Department at the Royal Academy of Fine Arts in Antwerp, after all.

Van Beirendonck’s cryptic symbolism and positive propagandistic sloganeering makes an expected return, expressing his message of peace and vitality more directly than usual. The phrase “WE NEED NEW EYES” is a frequent sight, as well as “NO WAR” and “SEE THE FUTURE” (an update on his classic “kiss the future” – it does seem less tangible and more unclear than it used to).

His graphics, especially on the beautiful sweaters, feature serpentine canines or canine serpents eating each other – it’s a dog eat dog world – but also a tree of life populated with animals sprouting new eyes and living in harmony. Another sweater features a cyclops removing his mask to reveal his face, which is the same as the mask: reinvention to discover the true self. It’s mystical, psychedelic, and totally kooky: something seen by new eyes, to inspire seeing with new eyes.

Walter Van Beirendonck is a rare gem, a generational fashion talent who dares to rebuke the stagnant cycles of the now and imagine a brighter future.

We do need new eyes, and we’re lucky to have an artist like Walter Van Beirendonck to help us see.