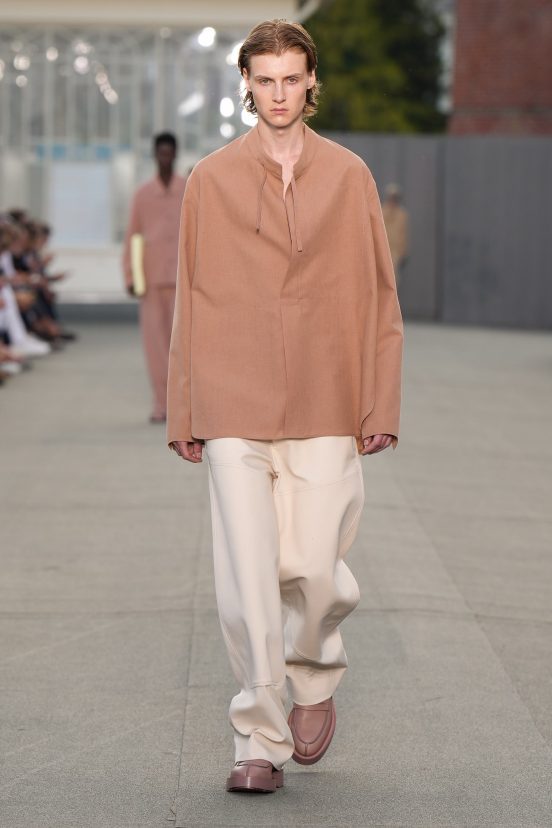 It can confidently be said, without a hint of hyperbole, that after the presentation of his Spring Summer 2023 collection, Zegna Artistic Director Alessandro Sartori is fathering a rebirth of tailoring, but not in the ways we might typically expect.

The classic suit is not the classic anymore, there are lots of different ways to wear it, and if we treat it well it can be even more important”

In a shrewd move by the brand, showgoers – after days sweltering in the city heat – were transported to the cooler climate of Oasi Zegna, both an area of natural beauty and the place in which brand founder Ermenegildo Zegna built his factory, as well as being the actual birthplace of Sartori. Arrival at the shows location created a palpable shift in mood and demeanour, shoulders were instantly relaxed and conversation among some of the industry’s key editors flowed freely, as the sense of urgency to get to the next show dissapated.

Looking to embed a sense of time and place, which would in turn create an emotional connection to the collection, Sartori looked to visual storytelling cues which included leading attendees – literally and figuratively – up the garden path to the manicured grounds of Casa Zegna, home of the historical archive, through a whistle-stop tour of the brands wool mill, then it was up onto the roof for a show set off by the sunset.

The first view of the collection on the runway focussed on soft almost sponge-like textures that created a cocoon of sorts around the models’ bodies, which Sartori later revealed to The Impression that the majority of the collection was developed from a base of knits. Everything from the smart boxy sets to the coated outerwear, giving it a structure that helped to disguise the technical wizardry lying beneath. “Believe it or not, but most of the fabrics are knit, all the transparent fabrics are knitwear, either knitwear with a membrane, knitwear alone, or treated with a thermal application” Sartori said in a post-show interview. He further elaborated on the technique, explaining ““Two years ago, we discovered a complicated process, where we weave the knit and once complete, we put it in a special thermal-application, and we decide if we want to create these levels that you are seeing on the garment, shine or matte, on a full panel or just a partition.”

The history of the shows setting was revealed to be where Sartori and his design team come together, creating a real-life oasis where they can employ  “a lighter way to think about our work and the way with less” developing new season textiles, that push forward new techniques.

“We created the black trench in knitwear, the black shirt is knitwear, its spongey fabric created for tailoring, so knitwear is the base of this new modern tailoring”

Considered details – such as hems that were gathered in the back, and cut straight in the front -are what can truly be considered an evolution of the tailoring category – yes that phrase is often banded about too freely, but what is being done at Zegna is stealthily changing the game.

Earth tones were given a grounding effect in the hands of Sartori, and inspired by the nature surrounding the buildings. Coffee, beige, sand, and vicuna, that references the animal and is a golden-brown tone, is used by Zegna as a visual calling card since it’s rebranding.  Paired back with bitter lemon, dusty pink, and charcoal, the designer also talked about his love of mixing colours “Three dark colours that I love to blend are coffee, charcoal, and black, with the black [rendered] in two tones, shiny and matte”. By mixing these tones and surface finishes together the designer hoped to create a new thought process around tailoring that is a blend of contrasts.

The blend with sportswear, luxury garments with new proportions is particularly important and is what I’m adding…season after season”