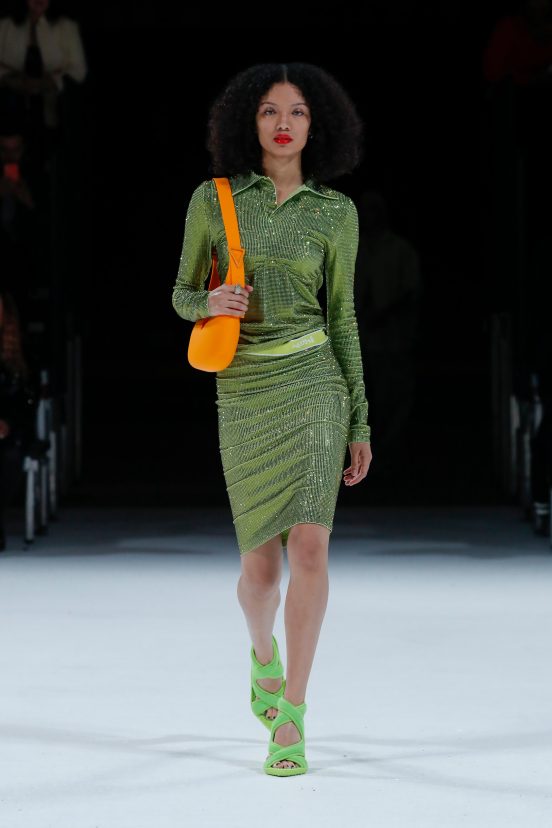 Detroit grit and glamour but does the cut of the shoe maketh the brand?

Although a widely anticipated S/S 2022 fashion month has almost come to a close, it is still not without a few more ‘heavies’ yet to come. Enter Bottega Veneta and the story of the Salon leading up to and including a much anticipated Salon 03.

The reason? This move undoubtedly promoted its buying protocol, but it also created the most intense amount of curiosity. As a luxury brand, Bottega Veneta was having a clean sweep, re-signifying its marketing messages and looking for new ways to engage its audience. Are these the right moves? A digital magazine, showing outside the fashion calendar and a veil of secrecy, has left us all wanting more. But more of what?
After renouncing Social media, Daniel lee debuted Salon 01 S/S 21 at a socially distanced private viewing in London’s Sadlers Wells. Next, Salon 02 took place at the Berghain club in Berlin, well and truly secreted behind closed doors. And now, for Salon 03 S/S 22, Daniel Lee, the Creative Director, chose to present a runway show in Detroit. Lee has had his eye on America for a while, so it comes as no surprise that he should select this mecca, known for the automobile industry and its contributions to music and the rise of techno (which inspired Lee’s show music by Moodymann).

The show notes explain the concept: A Salon was inspired by the intimate presentations of the Golden age of couture ( not dissimilar to the premise behind Balenciaga’s Haute Couture A/W 21). Each season we take salon ‘on the road’ to explore new territories and meet our local community.

The fact Lee is so invested in the cultural aspect of the collection is admirable, but on first looking at the video of the show, I was disappointed. Where are the beautiful iconic pieces that have made this a luxury brand?

The show notes mention: A focus on technicality and function meets modern, liberated glamour. The gritty technical inspiration came in the industrial, workwear pieces, but where was the glamour – well, apparently it came in the form of a nod to Marilyn Munroe’s halter neck dress and sixties shapes of skirts and dresses, covered in beads and paillettes.

There was not much groundbreaking in the women’s silhouettes other than that Daniel Lee chose sustainable materials to work into his very abbreviated shapes.

However, at least Lee is a designer who still thinks about sustainability and endeavours to incorporate it into his designs; for example, the textures in the knitted ensemble in re-cycled nylon or the rubbery pieces on parkas and dresses, and the beads and paillettes on skirts and dresses.

In addition, the menswear did not resonate; the items consisted of around three very oversized workwear pieces – wide trousers, an overshirt and a parka, to be exact – left me wondering. Sure, the connection between art and creativity and technical innovation is admirable, but the invention of metallic infused materials is somewhat passe.

Apparel aside. (which is really what a luxury brand should be about. From the square-toed heels to the puffy bags and rising hemlines, I am positive that every Bottega Veneta enthusiast is desperate to acquire the next ‘it’ shoe, the newest squishy handbag, or accessory. The shoes did not disappoint, and there was plenty to choose.

There were new triangular sandals, sling-backs, brightly coloured trainers in the brand’s signature ‘Bottega’ green while trainer technology came translated into high heels. And as for the bags, iconic codes of Bottega Veneta were reimagined in tactile materials, both industrial and mechanical.

If pulling back from social media was the intention to make the brand more covetable with a renewed focus, then, mission accomplished. Yet, I am still lusting after the clothes of yore, and even if the brand is reaching out to the more youthful Gen Z customer, from where I sit, it would appear that the cut of the shoe maketh this brand!