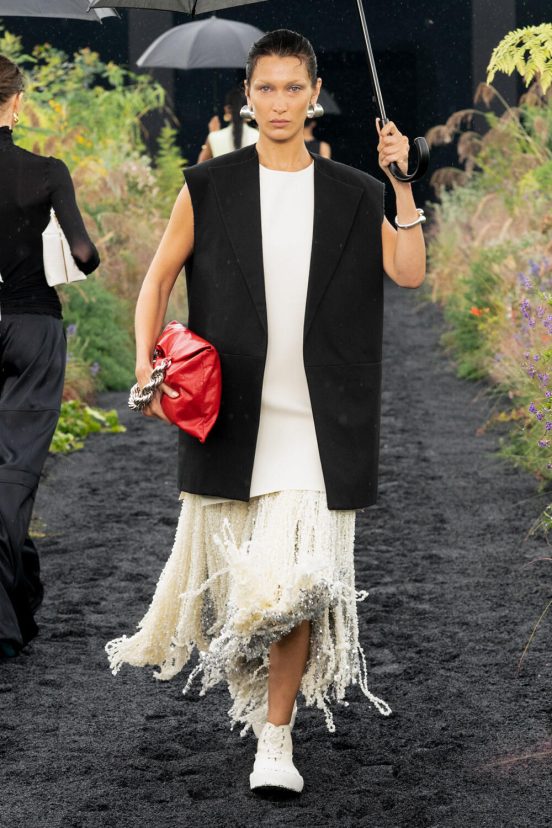 The Ying and Yang

Despite Milan turning on the rain, it did not deter Lucy and Luke Meier, the Creative Directors for Jil Sander, from presenting their quiet and thoughtful collection today. “Where there is a will, there is a way”, and good old-fashioned brollies (umbrella to the non-Brits!) saved the day.

Held at the Via Arcangelo Corelli, in an open garden setting complete with a grey gravelled pathway sliced between the flowerbeds, the Meiers sent out a presentation juxtaposed with nature yet simultaneously felt in harmony with their surroundings.

The Meiers began the collection this season with a strong clean, streamlined aesthetic; the Ying and the Yang, the Minimalism, and the Androgyny have become overriding partners within their Jil Sander collection.

Through this lens, we witnessed the opening dialogue between the masculine and the feminine – the constant pull between the opposites – the severity and the fluidity, the irreverent and the reverent.

The opening silhouettes of a trouser and short suit were both boxy in cut and generous in proportions and, although highly versatile, verged on being too loose and generous. It is all very well to expand on androgynous shapes,

but the picture tends to lose itself without the female allure attached; this was always the leitmotif behind a Jil Sander collection – the femininity underscoring the strength.

The Menswear, cut with an equal amount of generous spirit with square shapes and exaggerated proportions, provided the idea that these shapes could easily traverse the genderless story. However, the Meiers search for more relaxed, balanced proportions with the coupling of femininity culminated with a collection that felt a little of-kilter. The duo is expert in the construction of effortless yet precision-made shapes. It has always been adept and successful at continuing the legacy of the Jil Sander brand with modernity, sophistication, and a woman’s feminity. Still, several pieces provided a further juxtaposition to the change within their skilful repertoire.

Experimenting with knitwear, they evolved shapes into form-fitting dresses and tunics, fraying at the edges and giving the pieces a rustic allure – a natural proposition for the moment. The femininity came acknowledged through the cut-outs at the seams, exposing just a portion of flesh. An A-line suede sheath dress cut with masterful precision and pieced in gradations of colour, seemed like an easy piece for summer days. Like many collections this season, the Meiers included the ubiquitous cargo pant to provide a more relaxed edge to their usual playlist, giving this presentation a touch of character and much need versatility.

Then the Meiers switched it up a notch with eveningwear pieces that were a little out of character. A long dress with a fringed opera coat was somewhat ambiguous to the whole, as were the cocktail pieces, obliquely cut at the waist and trimmed in something textural. Textures such as the fringing count for the Meiers, but it just fell flat for lack of continuity.

The creative directors decided to experiment with a range of pastels – peach, lime, yellow – these were very pretty and were a perfect complement to the canvas of pale ivory, neutrals, and brown that took precedence at the start of the show. A shade of purple featured only by its singular use, as did the Fuschia pink in a top worn by one of the male models. Perhaps there was a reason for these stand-alone hues

Ordinarily, a Jil Sander collection from hands of the Meiers would offer breathtaking beauty, but that characteristic did not seem to resonate today.