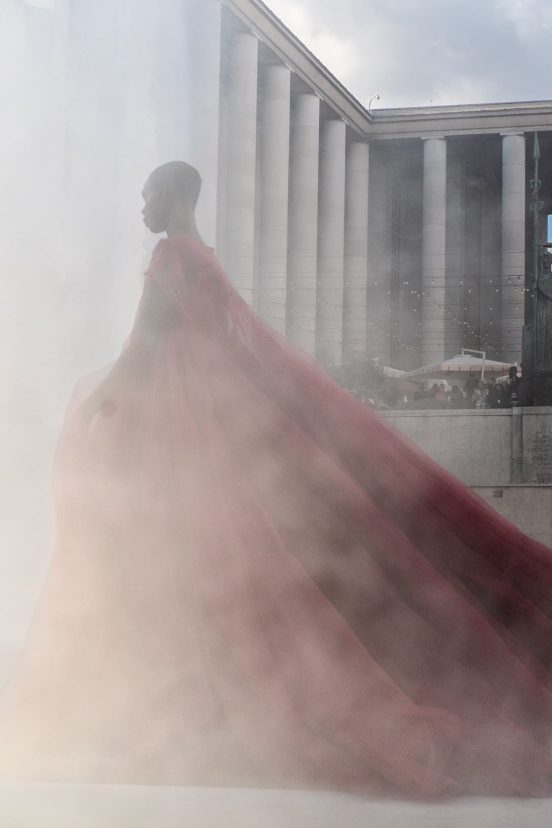 Smoke on the Water

Pushing the designer’s foray into vibrant color and using it to highlight a stunning exactitude of form, Rick Owens’ Spring 2023 women’s runway show was a rumination on what about humanity is essential and timeless, and what can change. Held as always at the Palais de Tokyo, the show’s staging felt especially ritualistic, as models strode across platforms over the setting’s iconic fountain, which was atmospherically shrouded in fog.

The mood was appropriate for a collection that, at once ancient and futuristic, esoterically human and outlandishly alien, explored a philosophical and artistic theme of transcendence, of reaching beyond humanity in order to reclaim it.

The collection shares the same title as its men’s counterpart, “Edfu,” an Egyptian city that dates back millennia and is the site of the Ptolemaic Temple of Horus. This history formed the inspiration for the season’s aesthetic and conceptual themes. As Owens shared in the show notes, “I have been retreating to Egypt where I find great comfort in the remoteness and scale of its history. my personal concerns and global discomforts feel small in the face of that kind of timelessness. Lying down in the dirt with the valley of kings within view is a very soothing perspective. The temples started by one civilization, seized and added onto by another, completed by another and then unearthed by yet another are reassuring in their stoic permanence.”

Echoing the architectural endurance of pyramids and temples, other looks are sculpturally built up, stratified, geometric, harmonious. The designer’s signature platform boots are subtly reworked with new dimension. Carried over from the men’s collection, the palette oscillates between organic neutrals or ghostly non-colors and electrifying magenta, yellow, and iridescent.

But while the men’s collection felt rigorous and mathematical in its use of technical, treated fabrics and infinite grid patterns, today’s collection incorporates a sense of the organic and animal repurposed by human means, speaking perhaps to the stratification of history, totemic identity, ritual sacrifice. Full grain cowhides collected as a waste product from the food industry have been tanned using only organic materials and natural glycerin that fill the pores of the leather and give it its softness and transparency. Boots are trimmed with shaggy cascades of wool that flow with their wearer’s movements. Denim in faded earthy finishes is draped and slashed, evoking unearthed relics or ancient craft techniques.

In many ways, like Owens’ experience of the unshakable presence of humanity’s most ancient monuments, the show was a consideration of what in our experience and understanding of the world is essential and unchanging: the imposition of lines and limits on space, the pursuit of knowledge, the love of the body, the power of nature. But it was also an invitation to open our minds and hearts to newness, to strangeness: not only in how we dress ourselves, but in what we think is possible. That the pyramids have stood through countless wars doesn’t mean there needs to be more. Owens teaches us to learn from the beauty of the past and to reimagine the beauty of the future.