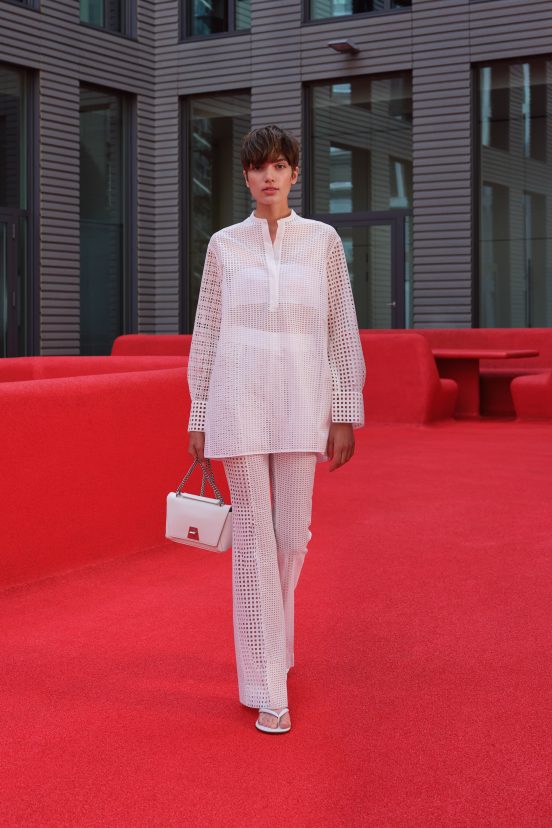 Concerned about international travel and the safety of the team and the audience with the constantly shifting landscape of the pandemic, Albert Kriemler made the executive decision this summer to present the Akris SS22 collection in video form. It is a visually stunning video, beautifully shot at the Roter Platz (Red Square) in St. Gallen, hometown to Akris. The Red Square was conceived by Swiss artist Pipilotti Rist and architect Carlos Martinez to create a collective living room in a public space. Particularly befitting to our emergence from our living rooms after last year and reentry into public life. The film does a great job of transmitting the movement and feel of the clothes, not to mention the deep love of art and architecture that is part of the Akris DNA.

Approaching the 100 year anniversary of the brand, Kriemler took inspiration from his grandmother, Alice Kriemler-Schoch, who founded the house making aprons in 1922. She is his guiding principle in design and, one could say, in life since he grew up with her in one big house. The image of her donning her apron after breakfast to go to the atelier every day signifies to him a confidence and readiness to step out into the world. In his own words:

That dynamic, almost intuitive move, when she pops it over her and wraps it around herself, there is something protective and powerful about it.”

This was the inspiration behind the collection, which is a new take on the apron and an homage to Alice.

I know that the strength of Akris lays in the quality of the materials, how they feel and drape on the body, so I was glad to be able to visit their offices in Paris for a catch up with Kriemler and the team. He explained his thinking about this moment, now that we are getting back to life, and his new take on power dressing. Kriemler strongly believes that:

A woman tends to look most confident, strong and free in clothes that make her feel her best self.”

He feels that “the new femininity is about embracing softness and using it as a strength instead of hiding it. Soft and strong, it’s cut for confidence.” As he said, a suit with a skirt or apron over it is a different suit. For example, there is a black double-face wool apron dress which, worn with black pants, I immediately thought of as a modern take on the tuxedo for women. The combination of apron skirts or dresses over pants is modern, versatile and playful.

Summer begs a crisp white outfit. The white pleated dress fits and moves beautifully. All of the apron looks can be worn closed or open, with an architectural detail of the signature Akris trapezoid showing up in the opening. And if you think about all the see-through that’s out there, Akris embroideries are always classy, never trashy.

For this collection, Kriemler has repurposed old embroideries, redyeing them and making a patchwork out of it, which speaks to the sustainable element so important to him. To that end, I also really appreciate his idea of investment pieces, which I’ve written about in a previous review. When the clothes are of highest quality and have a timelessness, you can cherish them for years, combining them anew.

Lastly, what would an Akris collection be without a special print from an artist? This year, there is a calm, refreshing print of the St. Gallen Sky and the Swiss Alps reflected in a lake by artist Katalin Deér. A breath of fresh air and good, clean living.