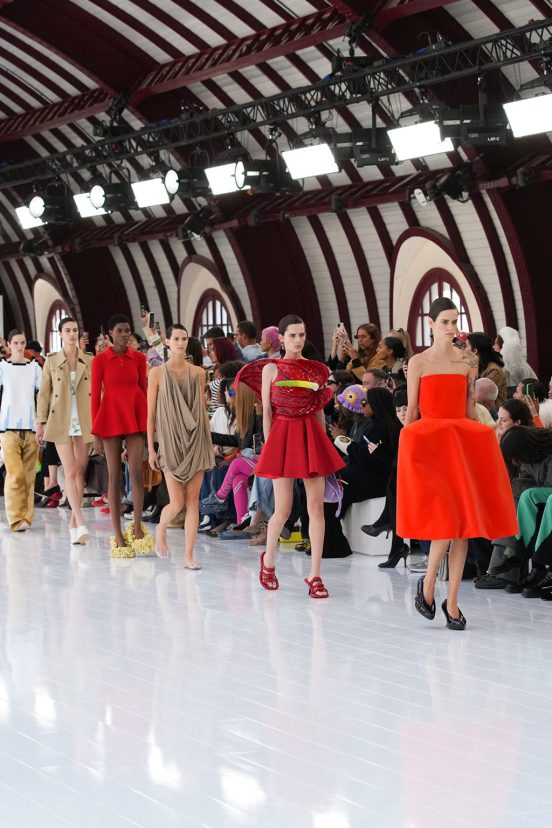 Even when he is distilling down his ideas and stripping them back, we are never not going to get a visual treat with an emphasis on surrealist proportions from Jonathan Anderson’s Loewe.

Anderson brought a very British take on twee to Loewe this season, modernising through micro lengths and graphic florals

Florals in springtime are hardly new news, but in the hands of Anderson there will always be a subversive twist. This season it was the “erotic tension and precision of the anthurium flower” according to an earlier social media post by the brand. The thing which enamoured this particular piece of foliage to Anderson was its highly glossy exterior which despite being produced by nature, somehow appears artificial.  Despite the connotations and tropical nature of the flower – used for reference and decoration – the collection had a specific brand of British twee about it, fluffy collared knits and waxed hunting jackets, as well as the classic trench were shrunken down as Anderson sought to “Reduce, tighten, [and] redesign the silhouette”.

The mini length which has been reduced to scandalous proportions is all that has been on everyone’s lips (and hips) these past two seasons, but here as the length was placed in cutesy knits, it gave off an almost childlike energy. And as $1100 tennis skirt hit their peak, Anderson could lead the move towards the more wearable tennis or polo dress.

Rather than reworking the basics, the designer instead prefers to glitch them.  As a nod to his own brand’s collection which was a commentary on how we are falling into our screens, here we get a proposal of sorts of what that might look like in sartorial form. Sweatshirts and chinos were printed with a pixelated graphic that not only harked back to analogue gaming, but could be developed as Loewe’s first foray into the Metaverse.

The modern-day crinoline skirt reappears here, within a more wearable shape as the futuristic minimalism of the simple fit and flare in black or grey, butts up against the historical context of the skirt’s construction.

Sweatshirts and chinos were printed with a pixelated graphic that not only harked back to analogue gaming, but could be developed as Loewe’s first foray into the Metaverse.

The stark white set that Anderson uses for his summer collections at Loewe provide the perfect backdrop for this seasons exercise in restraint, which still managed to create design statements that will be loved by fans of the brand, but the precise nature of the silhouettes in their reduced or elongated proportions continue to speak to how they continue to lead in wearable directional design.