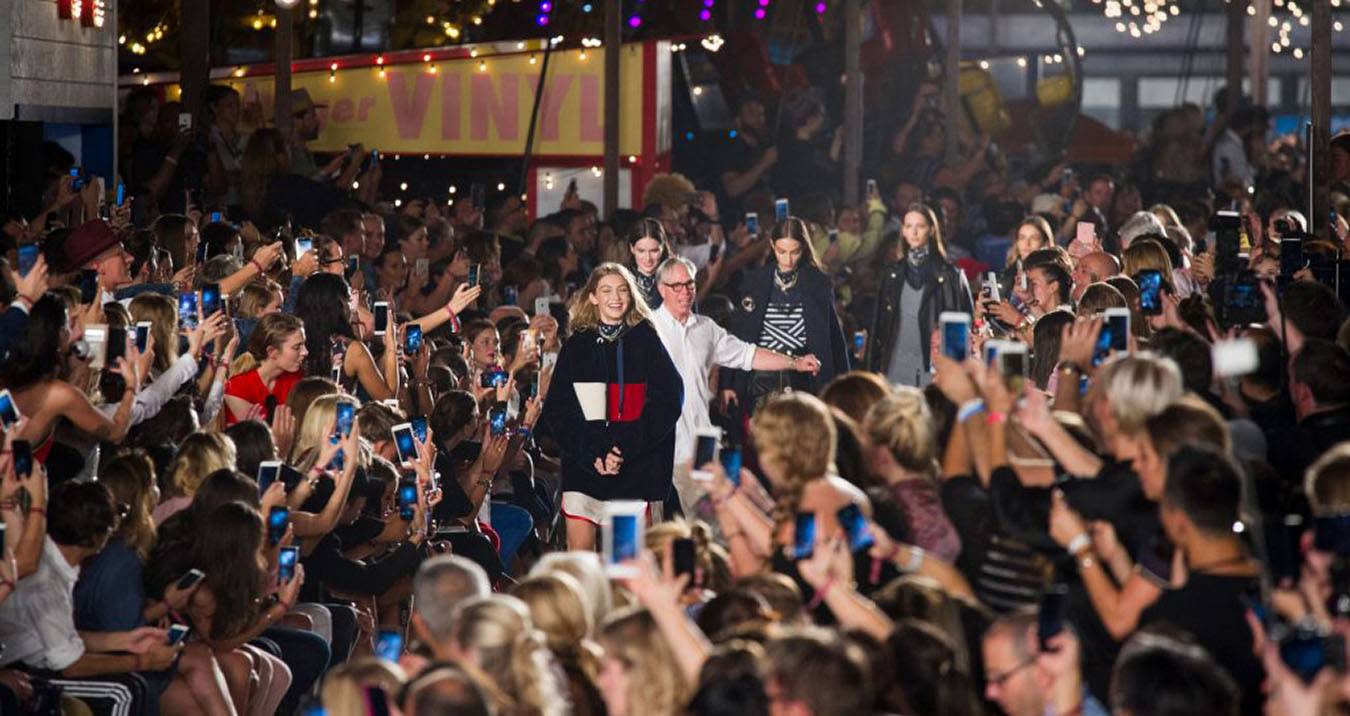 The Impact of Social Media on New York Fashion Week

New York Fashion Week just ended, and it is very clear that it has become a spectacle of social media usage. Instead of focusing on the looks, the audience often payed more attention to Snapchat and telling the world about where they are right now. Oversharing the latest looks within instants is a temptation but does it not divert from the actual experience, appreciating the fashion on the runway? The fear of missing out, aka FOMO, is a global phenomenon, especially during Fashion Week when everyone wants to stay on top of the latest happenings. For luxury leaders, there is really only two ways of dealing with this trend – embracing it or stepping out. Tommy Hilfiger, for instance, set up a whole fun fair on Pier 16 with a see-now-buy now model and Snapchat livestream for his Spring 2017 show. Everyone at the show was responsible for the brand’s huge presence on social media that day. Even customers who were miles away at the time of the event were immediately updated about the show through Snapchat. Thereby, viewers of the show took over the role of runway photographers. With an incredible fun fair surrounding that featured a ferris wheel and model of the moment Gigi Hadid presenting the collection, the Spring 2017 show made for a truly Instagram worthy moment at New York Fashion Week. All garments were immediately available for purchase as they strutted down the runway, in the brand’s first see-now-buy-now effort.

The company took their social media involvement even a step further by introducing Facebook’s first ‘fashion bot’ – a chatbot on Facebook Messenger that uses artificial intelligence for shopping assistance. Features include an answering ability of 7000 responses and the sharing of behind the scenes content from the runway show. Thus, Tommy Hilfiger ultimately created a new customer service tool by connecting immediate shop-ability with social media based communication. Designer Misha Nonoo, who is a part of the CFDA’s prestigious Fashion Incubator scheme, even showed her entire latest collection solely through an Instagram-based “Insta-show” one year ago and simultaneously terminated her wholesale relationships. Focus was shifted towards selling the clothes directly through her website, starting August 23. Direct-to-consumer sales had previously only made up a third of the brand’s total revenue. During the latest New York Fashion Week on September 7, 2016, Nonoo publicized her look book on Snapchat partnering with Refinery 29. This ‘virtual show’ was only viewable for 24 hours. Of course, the collection did not have any lag time between purchase and delivery. The designer is using technology to her advantage to set herself apart from her competitors. The move is targeted towards a busy customer who does not always have time to go to a store but is able to spend her ample minutes online shopping. Misha believes that digital platforms empower end users to experience fashion regardless of their geographical limitations outside of fashion capitals and that thinking of innovative ways to share designs resonates more strongly with consumers.

Banking on the rising importance of social media can be a wise move but with it also comes the curse of having to cater towards the public’s shorter attention span. Tony King, Creative Director and Digital Entrepreneur of King & Partners and Sellect, points out that “the knock on effect of social media publishing images from the shows instantly meant that consumers are more aware of the products and want to buy them immediately – that impact is huge.” Instantaneity is also the foundation of pre-order giants such as Moda Operandi that promise looks to be immediately available after appearing on the runway. King however expresses concern:

I think we are seeing a few brands that are unfortunately using their embracing of the latest social media platforms (and tech) as a way to get press as opposed to being a way to improve the customer experience or to tell their story.

Diane von Furstenberg, on the other hand, invited buyers to a cozy private party for her Spring 17 collection. The president of the CFDA thereby stepped out of the traditional fashion show realm and created a more intimate experience. Attendees were invited to observe the DVF woman in her natural habitat. Instead of previous muses such as Gigi Hadid, Kendall Jenner and Karlie Kloss, new faces were introduced to showcase the collection at the event. The presentation was quiet and intimate, with a focus on the garments rather than the social media presence.

With the rise of technology in every aspect of our lives including fashion, changes are bound to happen. New York Fashion Week was broadly televised through social media and gained the most attention through this medium. Not everyone has the possibility or the means of seeing the latest collection live and many depend on this alternative viewing method. According to Tony King, “Social media has transformed fashion shows from quite serious industry insider events where buyers preview collections into, in some cases, a public brand extravaganza!”

As appealing as the digital medium is, it might still not be able to compete with the real-life experience of being present at a fashion show. As luxury leaders, there is a decision to come to in terms of how to react to these recent changes. Whatever choice is made, the main criterion to be considered is what is most in line with the brand’s image.